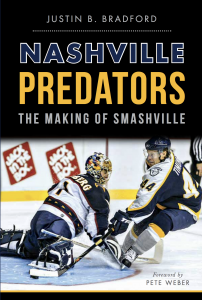 “Nashville may be the country music capital, but local hockey fans know it as Smashville. The Predators adopted their name from bones of a saber toothed tiger found beneath a local building. Craig Leipold, original owner of the Nashville Predators, first purchased the expansion rights in 1997, and the team quickly built a loyal following. They won 28 games in the inaugural season. Twelve seasons later, the team finished second in the Central Division and appeared in its first-ever conference semifinals. One year later, they finally dispatched the long standing rival Detroit Red Wings 4-1 in the opening round of the playoffs.

Author Justin Bradford details the fascinating history through unique player anecdotes and perspectives from those involved in the team’s rise to prominence.” 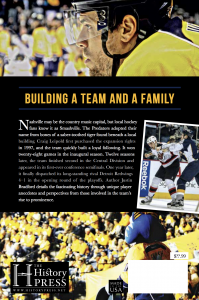 Not only does the book include the full history of the Nashville Predators, but it’ll also include over 45 pictures of alumni, events and game action!

Order at these retailers: 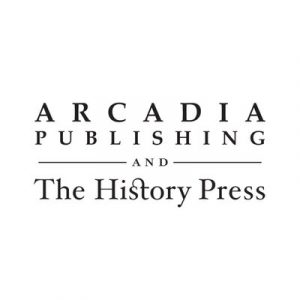