Predators bounce back with win over Subban, Devils

The Nashville Predators made their return to Bridgestone Area after a Wednesday night loss against the Las Vegas Golden Knights. Captain Roman Josi laced up his skates for his 700th NHL career game in a 4-2 victory.

The Predators managed to keep the Devils away from Juuse Saros and crashed the net in front of Jonathan Bernier. According to Nashville Predators PR, they allowed just two shots on goal in the first period, tying the franchise benchmark for fewest shots against in an opening frame.

Josi got his team on the scoreboard with his seventh goal of the season as his shot trickled past Bernier with 12:28 left in the first period. Bernier made an excellent stop against Matt Duchene during a 2-on-1 break just moments later. The execution in their own offensive zone created lots of pressure throughout the game.

Philip Tomasino found his fourth goal of the season and the second of the night early in the second period. Coach Hynes said he is very coachable and he understands the assessment of his game. Tomasino has quickly become a fan favorite and said it felt great to be rewarded.

This team had success getting on the attack and forcing breakouts. The offense created quality looks in front of Bernier. All but two skaters recorded a shot. Mikael Granlund worked hard on enforcing the net-front presence for his team. Each shift, he worked to create opportunities with both his positioning and body. He ended the night with 3 shots and a goal.

Alexandre Carrier played well on both sides of the ice. He found a beautiful empty-netter and recorded his first multi-point game.

After the empty-netter and a late Devils goal, the Nashville Predators walked away with a 4-2 victory. The defensive effort and execution overall created a well-rounded effort from this team.

The Predators look like they are playing their best hockey when remaining in control with a sense of urgency in their movements. They will need to be at the top of their game as they travel to play the Colorado Avalanche tomorrow. 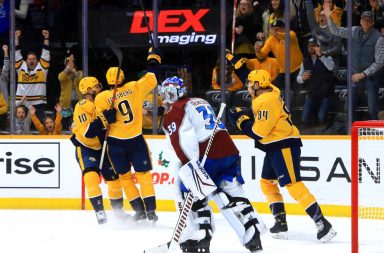