The vision of a promising future is alive and well among Nashville Predators fans. After a few years of swapping futures for present potential resulting in unmet expectations, a renewed focus on potential has taken hold. Draft picks once monetized for veteran presence have instead brought an infusion of young talent. From juniors to European leagues to the cusp of the NHL there are promising players throughout who make up the future of the Nashville Predators. While everyone watching the Predators with even a casual eye will know the big name prospects like Philip Tomasino, David Farrance, Zachary L’Heureux, Yaroslav Askarov and Fyodor Svechkov there are some players getting close to NHL readiness that are maybe flying a little under the radar. And while they may not ascend to star status, there is great potential to be impactful contributors for years to come. Let’s take a look at a few of these lesser-known prospects and shine a light on their progress.

Afanasyev may be the biggest riser in the entire prospect class. He put together a very strong 2020 season for the OHL’s Windsor Spitfires with 31 goals and over a point per game. However, the Covid shortened NHL seasons in 2020 and 2021 cut away his ability to make an impression in training camp. After a season in Russia, Afanasyev has come into Predators training camp looking more physically mature and far more polished as a player. From a comparable standpoint, I see a lot of similarities with Gabriel Landeskog and Alex Killorn. It remains to be seen if Afanasyev’s offensive ceiling is that high but the power forward game he has shown mirrors some very effective players. Between rookie camp and the start of the main camp, he has been contributing on the score sheet and visible as a player all over the ice. This progress all came together in the Sept. 30 preseason game vs TBL with a standout two-goal, one assist performance. Egor was all over the ice dominating play and looked every bit an NHL player. Egor Afanasyev will most likely start the season in Milwaukee but has put more established players on notice that he’s coming for an NHL spot sooner rather than later.

Parssinen is a tremendous example of putting in the work. Drafted in the seventh round, he had some raw skills but was thought to lack the physical attributes to play at the NHL level. Over the last couple seasons, Parssinen has improved his skating tremendously and built out his physique such that his raw talent has really shown up. Parssinen put up very strong numbers in the SM-liiga, a very good Euro league, at the age of 20 which is very impressive. Now, he has advanced to playing in all situations and being a core contributor on a TPS team with multiple ex-NHL and future NHL players. Parssinen will return to Europe this season but another strong showing will put him at the top of NHL possibles in 2022.

Del Gaizo finished off a strong collegiate career at UMASS in 2020 and quickly the Chicago Wolves, who were partnered with the Predators/Milwaukee Admirals to provide a place for Predators prospects to play. Known as a playmaking offensive defenseman, Del Gaizo made a quick impact at the AHL level. Now in his first training camp, he is displaying a more complete game necessary to contribute at the professional level. Del Gaizo was already a strong puck carrier with very good instincts for finding teammates in the offensive zone but the growth in his defensive game bears well for his future. He also looks bigger and better suited to match up with professional players physically. Del Gaizo will play for the Milwaukee Admirals this season but should see big minutes and many opportunities to contribute in all situations.

The future of the Nashville Predators is bright not only with top prospects but with the type of depth talent that creates sustainable winning rosters. Beyond these three there are a number of other players who look to make the leap to NHL caliber in the next 2-3 years. As the 2021-2022 season progresses we will look to highlight more of the next wave of talent to sport Predators gold. 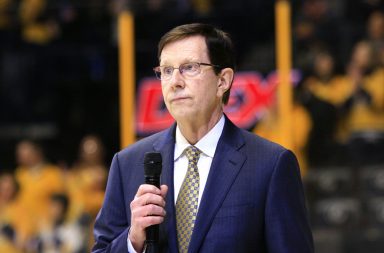