It was announced today that the University of Alabama in Huntsville was eliminating the men’s hockey program, along with men’s and women’s tennis, immediately. We spoke with athletic director Cade Smith about the decision. Listen above.

Below is the letter sent out to UAH faculty, staff and students:

Statement from the WCHA:

On a personal note…

Most know Cam Talbot from UAH. A recent alum of the program is Josh Kestner. He’s had a taste in the AHL with the Marlies and most recently was named ECHL MVP for the 2019-2020 season with the Toledo Walleye.
We’ve been covering UAH Chargers hockey since the lockout. The program was big for us because it gave us an opportunity to watch college hockey close to Nashville. It gave players a place to play, coaches a job, fans a team. The program has been great to Penalty Box Radio as they’ve been very open with me bringing young journalists to games to help them get training. Hell, PBR even helped find the previous two pxp guys in Zachary Taylor Bryan & Peyton Turnage.

And some may say “I didn’t realize they had a team.” They did. The program has 2 NCAA Division II Championships. They also made two appearances in the NCAA DI tournament. It’s a sad day to lose a program. And it’s sad to lose a hockey program in the south. UAH having a program inspired local children to play hockey. Them, along with the Havoc brought an interest to the sport. And that’s something we want, right? For the sport to grow and for more people to play it.

I’ll miss the trips to Huntsville, but this isn’t the end of the story. It may seem a little dim now, but hockey will continue to grow. And it’ll continue to grow in the south because we’ll keep working hard to make sure of it. And that’s the damn truth. 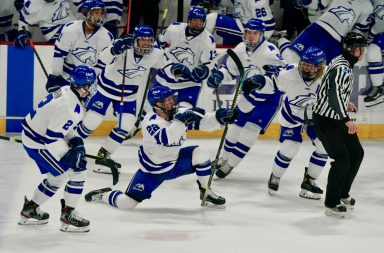