After a couple of back and forth chances between the Kansas City Mavericks and the Indy Fuel, the home team held on for a 4-3 win in overtime.

Fuel forward Liam Coughlin broke the ice with his first professional goal. Kansas City’s Mitch Hults tied the game, silkily cutting through the Fuel defense in their own zone. Dylan McLaughlin of the Fuel quickly reclaimed the lead on the power play with his first professional career goal. As the period was expiring, assistant captain Alex Krushelnyski tipped a point shot over Kansas City’s Nick Schneider’ shoulder on the short side. The Fuel held a 3-1 lead going into the second period.

Early in the second period, the Mavericks’s Corey Schueneman cut the two-goal lead in half. Chances were traded, but Schueneman’s goal was the only true action in the period. The Fuel still had a 3-2 lead going into the third period.

Late in the third period, Bryan Lemos of the Mavericks tied the game on the man advantage. Turnovers in the defensive zone cost the Fuel two goals in consecutive periods, but Indy still held the momentum in terms of possession and scoring chances.

The Fuel played the majority of overtime in the offensive zone aside from one huge chance, and eventually, Graham Knott tapped home a loose rebound to win the game for the Fuel.

The camera fell over, and I could not film a perfect recap video, but hear my scrum voice and Liam Coughlin here! Fuel slip in the second, lose 4-2 to Florida 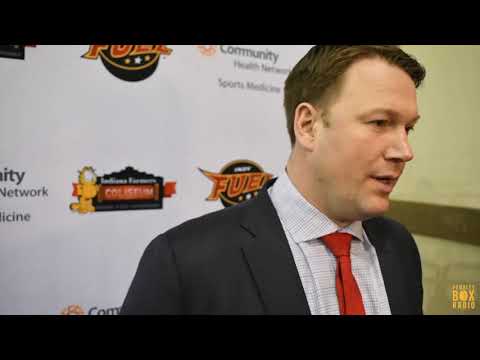 Indy Fuel run out of gas