That one didn’t go the way most thought it would after the Nashville Predators entered the third period with a 4-1 lead. Instead, the Predators allowed four goals by the Calgary Flames in the third period, and then lost 6-5 in overtime. The loss ended their four-game winning streak, but luckily for Nashville, they still registered a point.

Matthew Tkachuk scored the overtime winner with just over one second remaining in the extra period. In addition, Tkachuk also scored the goal that tied the game to send it into overtime.

On the other end, the Predators started out hot and then allowed the Calgary Flames to get back into the game. Nashville outshot the Flames 27 to 9 through the first two periods. Calle Jarnkrok notched back-to-back shorthanded goals in the contest. And, on the night where he signed a contract extension, Austin Watson had a four-point night with two goals and two assists. 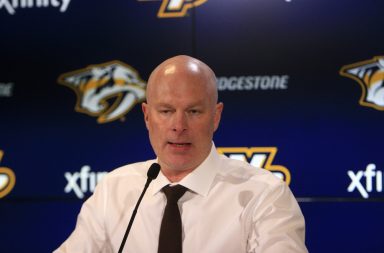 Can John Hynes Save The Nashville Predators?