The Milwaukee Admirals started their regular season on a low note on Sunday as they lost 5-2 to the Iowa Wild. A series of six penalties, a lackluster powerplay, and five injuries made sure the Admirals couldn’t mount a comeback.

The first period did not start well for the Milwaukee Admirals. Two shots into the game Milwaukee goaltender Troy Grosenick left the game with an injury. It appeared the puck made its way to his chest and may have knocked the wind out of him. Connor Ingram would play the remaining 57:02 in his debut with the Admirals.

Scoring start at 10:21 in the first period when Colin Blackwell made a cross ice pass to Steven Santini who fired a slapshot from the top of the circle. Yakov Trenin was able to tip the puck into the net for the first goal of the Admirals’ season.

The Admirals’ lead only lasted 15 seconds as Brandon Duhaime was able to beat Ingram to tie the game. Former Nashville Predator Cody McLeod had the primary assist on the goal.

The second period is where the Iowa Wild ran away with this game. The Admirals had killed four penalties before Joe Pendenza was sent to the box for a slashing minor at 10:03. The man advantage for Iowa allowed Gabriel Dumont to score his first goal of the game at 11:27. Iowa would score a little under six minutes later at 17:15 with a goal from Mitch McLain. The period ended with a Yakov Trenin boarding minor which allowed Gerald Mayhew to score on the powerplay at 18:30.

Going into the final period 4-1 certainly makes it difficult to come back. Milwaukee did not see another goal until quite late in the period. At 17:44, Miikka Salomaki scored on a practically wide open net. Josh Wilkins and Anthony Richard had the assists.

Immediately following the Salomaki goal, the Admirals pulled Connor Ingram in favor of an extra attacker. Milwaukee didn’t do much during the final two minutes. Iowa scored an empty net goal at 19:12 (Will Bitten from Mayhew and Dumont).

The Admirals will play their second game of the season on Friday in Grand Rapids against the Griffins. Milwaukee will then have their home opener on Saturday in their first ever matchup against the Laval Rockets.

This was a rough start for the Admirals. However, I would urge fans not to see this as doom in gloom for a few reasons. The Admirals had four injuries that kept good players off the ice. Atwal, Gaudreau, Dauphin, and Novak were all on IR for the game.

The injury of Troy Grosenick was also a big downer for the Admirals. Grosenick is coming off of an All-Star season and has more exposure to the Iowa Wild than Connor Ingram has had.

The Admirals, for inexplicable reasons, have struggled against the Wild in Des Moines. This game was the first time since the 2017-2018 season that the Admirals scored more than one goal in a game in the Wells Fargo Arena.

One aspect of the Admirals’ game that needs to be fine tuned before their Friday matchup is the amount of penalties taken. It is tough to sustain offensive pressure when you spend 10 minutes of a period in the penalty box. Undisciplined play allowed for plenty of scoring chances.

Rem Pitlick and Eeli Tolvanen: It felt like they were no where to be seen through this contest. It’s possible the Admirals’ coaching staff wanted to ensure that neither of them were injured in this season opener, given the amount of injuries already plaguing the team. I expect their play time to increase immensely as the roster becomes healthy. 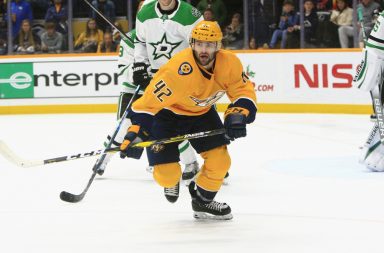 Colin Blackwell on success since Milwaukee and advice for young players