Nashville's All Star Weekend and the Power of Representation

If you’ve read a piece of mine before, you know I am a quantitative thinker. I rarely venture into the abstract, emotional, or subjective. In fact, I tend to avoid it. I also strive to be comprehensive. As a recent example, when I was preparing to track stats for this past weekend’s SECHC championship tournament, I explained, “I want someone to be able to pick up these spreadsheets in fifty years and tell me exactly what happened in each game.”

Interpretations of mine are frequently met with resistance. Objectivity leads to cold and detached conclusions. Believe me, I understand. When you find some no-name blogger criticizing your favorite player, no amount of analysis will change your mind. “Statistics don’t show everything,” you might say. Many do. This returns me to what I said about being comprehensive. My typical goal is to explain as much as possible about hockey using numbers. So here are some numbers for you.

32: The number of players representing their sport at this year’s NWHL All Star Game.

6,120: The new attendance record for women’s professional hockey in the United States.

Now, though, I’m about to admit something for perhaps the first time. These statistics, as impressive as they are, don’t show everything. No word count would sufficiently describe the events of this past weekend, and their impact.

Allow me to set the scene. On Saturday afternoon, I had spent approximately 60% of the past 24 hours at Ford Ice Center, tracking college hockey stats for the SECHC championship tournament. Our group of volunteers was running like a well oiled machine. Frankly, I was enjoying the monotonous nature of the work. Faceoff, shot, block, save, whistle, scrum, repeat. All were accounted for.

Imagine my surprise when I walked across the hall, looked down onto the north rink, and saw a small army of children on the ice. Among the children, all of them girls, were a handful of National Women’s Hockey League players.

Players like two-time Olympic gold medalist Shannon Szabados, IIHF world champion Lisa Chesson, Olympic gold medalist Nicole Hensley, and others. They were leading a girls hockey clinic a couple hours before the NWHL All Star skills competition. I had planned to spend my break eating lunch and tweaking spreadsheets, but I was too intrigued.

As I stood there sporting an amused grin, Justin Bradford walked up next to me and proudly said, “This is how you grow the game.”

I hope that strikes you as amazing as it did me. Think about those kids skating on the ice in Nashville, Tennessee, passing, shooting, and goofing off with multiple world champions. I promise I’m not exaggerating – I have tears brimming my eyes just writing about it.

When it was time for the skills competition itself, a sellout crowd of more than 500 people filled the cold metal stands and walkways. The players emerged from the locker rooms, having switched from their Beauts, Pride, Whale, Riveters, and Whitecaps jerseys into those of Team Szabados or Team Stecklein, the all star captains. Accompanied by cheers, applause, and cowbells, the players smiled and tapped their sticks as each other was introduced by Paul McCann.

During the skills competition, Kendall Coyne Schofield broke her own well-televised record, winning the fastest skater competition with a time of 13.9 seconds. Blake Bolden earned the loudest cheer of the day as her third slapshot hit the net at eighty miles per hour. All of the events were completed with flair, with skill, and with joy. Afterwards, fans waited in substantial lines to receive autographs from the players.

I simply do not recall the last time an event left me feeling so uplifted.

On Sunday, the All Star Game itself awaited. As I drove in the rain to Bridgestone Arena, I realized I had no idea what to expect. Fellow PBR contributor George Matarangas and I made our way from the parking lot to the arena, picked up our media passes, and ventured inside. We watched as the Predators negated a 3-1 deficit against the Blues, ultimately losing in overtime. Then, the main event.

Teams Szabados and Stecklein were again introduced, this time to a crowd of over 6,000. Later, it would be announced that this attendance was record-setting. Even the press box cheered for that one.

The game itself was perfect. In the latter half, I defaulted to my usual role and tracked stats. Katie Burt made 29 saves, more than one per minute. Team Stecklein produced 15 high-danger scoring chances in under 25 minutes, four coming from NWHL rookie Jonna Curtis. Kateřina Mrázová (number 92) made several passes that would have amazed Nashville’s own number 92. Goals from Lisa Chesson and Emily Fluke (both wearing #11) tied the game, forcing a shootout, where Katie Burt made a final save to win it all.

As the game concluded, we made our way downstairs for the media scrum. A representative from the league asked us which players we’d like to interview. “Szabados, definitely” someone said. Stecklein and Kessel were requested. I spoke up last, hoping to chat with Jonna Curtis. The rookie forward leads the league in primary points per game, driving her line against top competition. My kind of player.

Shannon Szabados came out first. I was acutely aware that we were face to face with a person who has eight Olympic or IIHF medals. When asked about the weekend in Nashville, she laughed, saying “The fans are so loud. We had a blast.”

Next was Minnesota’s Lee Stecklein. “I’m very proud to be here, being with these incredibly strong women… when they announced [the attendance record], we came in the locker room and were talking about it. I hope it just keeps growing.”

I did get my chance to ask Jonna Curtis about her offensive production this season. Her professionalism shone as she provided the tried-and-true response: “Just try to get pucks on net.”

Amanda Kessel, a two-time Olympic medalist, then provided perhaps the quote of the weekend: “I want to come back here every year.”

The NWHL All Star Weekend transcended description. No arrangement of its individual elements can properly explain its influence. No sound bite from a player can fully speak to its importance. It proceeded relatively quietly, and ended abruptly as its participants rushed from Bridgestone Arena to return to Saint Paul, Newark, Buffalo, Boston, and Stamford. Soon, they’ll compete for the Isobel Cup.

It’s one thing to hear about the value of representation. Seeing its effects firsthand is breathtaking.

There is a profound sense of community within the NWHL. It’s safe to say that many of its players wake up some days just wanting to play hockey. Still, though they compete against one another, they pioneer together into a world that is not always appreciative of their efforts. Many on social media platforms will tell you that they are not important, or are not popular enough to make a difference.

The faces of the girls at Saturday’s clinic tell a different story.

Those girls have seen, firsthand, world champions that look like them, and who face the same challenges. One of them may be Tennessee’s first hockey player to win an Olympic medal.

I have never been more proud to be a part of Nashville’s hockey community, anonymous as I may be. No matter what happens in the coming months, I truly believe this All Star Weekend was the most important hockey event for Nashville this year.

This is how you grow the game.

PBR Live – Krull on NAHL, Scheig on CBJ, plus NWHL 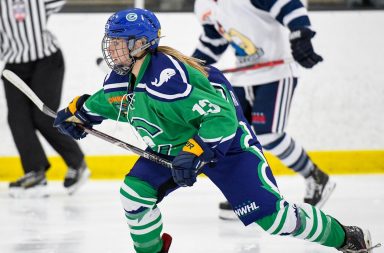