What a whirlwind of a week for Kendall Coyne Schofield. What started as a simple lap around the ice landed her between the benches on NBC and then almost directly in our hearts. Her comments and critiques on the game were subtle and intriguing, and best of all, they got better as the game went on.

I’m typically not a fan of between the bench reporters. I don’t think they add much to the game and quite frankly, I don’t care who’s chirping because NBC wouldn’t let us hear anyways. The only person I like at ice level is the little ball of hate, Ray Ferraro.

Ferraro’s ability to articulate his point of view and how it differs from what we’re seeing from above is an invaluable skill. Most of the time, the ice level guy just reiterates what the booth analysts already said, but not Ferraro. He brings a fresh take and often points to little details that we, as viewers, miss when we’re too busy looking at the bigger picture.

What’s crazy is that for as great as Ferraro is, Coyne Schofield has the potential to be even better. As the game went on and she gained more confidence, Coyne Schofield provided deeper and deeper context to the plays that were happening. It was a beautiful thing to witness, like a baby learning to walk and subsequently sprint all in a matter of moments.

I hope we see more of her soon, but she still has a playing career and I doubt she’ll be out of a job anytime soon. From a very selfish standpoint, I hope she continues to work as an analyst, even if just once per month.

I know I just spent the last 250 words gushing about how great some aspects of the NBC broadcast were, but I’m actually against the current format.

Having a play by play caller made a lot of sense when we didn’t have high definition televisions and no one could read the names on the backs of players’ sweaters or follow the puck, but we’re in a new era. We can see everything we need to see with ease, plus the game has sped up so quickly that many of the older announcers can barely keep up.

My suggestion is to move on to something a bit more modern and cut the dead weight. Instead of a play by play person and a color commentator, instead use three analysts in a fireside discussion style. What I mean is, have three experts talk about a game while it happens like you and your friends do when you’re together.

The trick will be to bring in three analysts from different backgrounds. My ideal trio would be a former player who can actually speak on tv, a stats based analyst who can apply context to numbers, and a host who can ask the right questions and keep things moving. Basically, my perfect trio would be Ray Ferraro, Dimitri Filapovich, and Jeff Marek.

Or, if that doesn’t float your boat, we just get rid of announcers all together and play the sounds of the stadium. Only this time though, we don’t censor. It’s not possible because of the backlash, but it’d certainly be entertaining.

2. A Change In Weather

I can’t imagine the feelings that raced through Jake Muzzin when the trade was announced. He was leaving the basement dwelling L.A. Kings behind and heading to a top four role on a top five team.

The Toronto Maple Leafs gave up a lot, a first round pick plus two good prospects, but it seems worth it. Muzzin is a defender who embraces physicality in his own zone while also opting for skill in the offensive one.

I think he’ll do great alongside Morgan Rielly or Travis Dermott, but it’d be fun to watch him and Jake Gardiner create havoc together. Ultimately, I wanted Muzzin badly on the Predators so he could replace Weber or Irwin, but the Predators don’t have the pieces to trade away that L.A. would want back.

All in all, this is a great move for both teams and I’m curious to see if this puts Toronto over the hump.

3. The Year That Didn’t Happen

You might be saying, “we know Oleksiak is definitely worth a fourth round pick, but what’s weird about this?” Well, he was traded for the exact same pick. Pittsburgh basically got a year of Oleksiak’s play for free, as they’ll still be able to draft with their original pick.

I’m not sure why this trade was made by the Penguins, but it’s a fun little piece of hockey trivia.

Sad times in Kootenay as the Ice will be moving to Winnipeg after this season ends. It makes sense, but it’s always sad to see a smaller town lose their junior hockey club to a big city.

5. Elephant In The Room

Austin Watson was recently admitted to stage two of the NHL’s substance abuse program to the surprise of many. Because of this, Watson is suspended indefinitely and without pay for the foreseeable future. This suspension has no limit and will only end once he is cleared to play by the administrators of the program.

Watson was moved into stage two after his assigned doctor believed that he violated his stage one treatment and follow up care. This essentially means that Watson did not voluntarily seek out this treatment, which is why he has to forfeit salary.

No confirmed details are known about what led to Watson’s admittance into stage two, and so I won’t speculate about the specifics. A friend of mine who shall remain nameless brought up an interesting point though, the last few weeks have clearly been tough on Watson. He’s gotten into multiple fights in quick succession while also traveling on one of the longest road trips of the season. I can’t imagine that made his current situation any easier.

I very much hope Watson is able to find his peace and slay his demons. Addiction is a terrible thing and I wouldn’t wish it on my worst enemy. No matter what’s happened in the past, I hope Watson can at least work towards being better than the man he was yesterday. 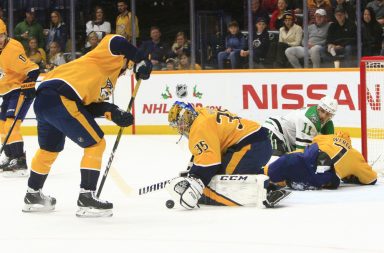 Preds disappointed in another Saturday loss at home