The Milwaukee Admirals split their Friday and Saturday matchups as they enter the AHL All-Star break. On Friday, the Iowa Wild shutout the Admirals 3-0. On Saturday, the Admirals had their highest scoring game of the season in an 8-2 blowout over the Manitoba Moose.

The Milwaukee Admirals have struggled with the Iowa Wild so far this season. The Admirals are 1-4 against the Wild so far. The Admirals led in shots on goal, but Iowa’s goalie Andrew Hammond was up to the task and stopped all 31 shots by the Admirals. Milwaukee’s Troy Grosenick was only able to stop 24 of the 26 shots that he faced. The final goal by the Wild was an empty net goal in Milwaukee’s last attempt to generate some offense. The game did start off on an exciting note when at 0:42 in the first Matt Donovan and Iowa’s Carson Soucy got into a fist-to-cuff. The rest of the game saw no action for the Admirals, despite two power plays. Former Admirals and Predator Cal O’Reilly had two assists in this matchup.

After Friday night’s loss, the Admirals came out and played the exact opposite game. Milwaukee’s offensive performance was dominant and Eeli Tolvanen had the offensive breakout that everyone has been waiting for.

Speaking of Tolvanen, scoring started out at 12:00 in the first when he was dropped a pass from Cole Schneider and shot from the middle of the circle right past Manitoba’s goaltender Ken Appleby. The Admirals were on the power play during the goal after an interference call on Peter Stoykewych. Tolvanen’s goal was the lone goal of the first.

Milwaukee put this game away in the second period. Tolvanen scored his second goal of the game at 1:20, his seventh of the season. This was Tolvanen’s first multi-goal game with the Admirals. Joe Pendenza scored his first goal as an Admirals at 4:25 with an assist from Scott Savage (his first assist as an Admirals) and Anthony Richard.

Manitoba managed to get a goal on Milwaukee net-minder Tom McCollum when Chris Collins scored his second goal of the season. At 12:26, Manitoba’s Alexis D’Aoust was called for holding. This allowed Emil Pettersson to score at 12:38 with assists from Matt Donovan (14) and Cold Schneider (17). Also, if you’re keeping track, this was the second power play goal for the Admirals in this game. At 16:56, Emil Pettersson scored his second of the game, making it his 11th for the season.

Jeremy Gregoire scored his fourth goal of the season at 2:43, Tyler Gaudet (6) scored at 5:34, and Yakov Trenin (7) at 10:27. Trenin’s goal was on the power play after an instigating penalty on former Admiral Felix Girard. Girard and Savage had a brief fight at 9:32 after Savage had a rough hit on one of the other Moose skaters. Girard received the extra penalty and a 10 minute game misconduct.

The Admirals experienced what can happen when you produce on the power play in that matchup! They improved to 17.1% after being around 16% at the start of Saturday’s game.

I hope that Eeli Tolvanen experiencing his first multi-goal game will help open the floodgates for him to start producing at the levels that people have expected him to.

Cole Schneider has been an incredible pickup for the Admirals. In his six games with the Admirals since being traded for Connor Brickley he has scored one goal and has five assists.

Milwaukee enters the All-Star break in 4th place in the Central division with 51-points. With that being said, they are only 4-points out of 1st. Iowa and Grand Rapids are tied for first with 55.

The Admirals are off now until Friday February 1st when they will face the Manitoba Moose again in Milwaukee at 7:00PM Central at the UW-Milwaukee Panther Arena. 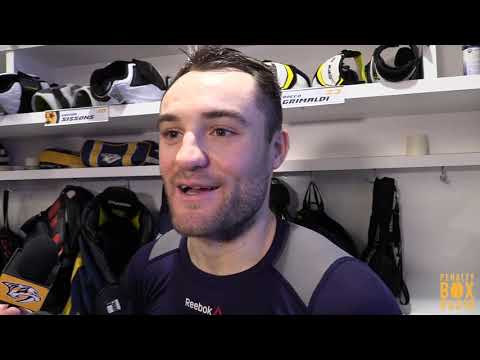