Musician and noted flat earth conspiracy theorist B.o.B once said “So call me Mr. Magic Man, I float on Cloud 9.”

Filip Forsberg should really get that line licensed and put it on a T-shirt.

In addition to the three assists he had in a 5-3 Nashville Predators win over the San Jose Sharks, Forsberg nearly scored one of the most ridiculous goals of the year in the first period. With not much space and a defender draped all over him, Forsberg got the puck up on his stick and nearly lifted it up and over the shoulder of goaltender Martin Jones.

Only the goalpost kept him from the SportsCenter Top 10.

Some might not have even noticed what was happening at full speed. That is probably because Forsbrrg has made a habit of making the absurd plays seem like a walk in the park.

“The thing for me is he creates so much so much space for myself,” center Ryan Johansen said. “When he’s making those skilled plays that were not used to seeing, it sucks people in and gets defenders to give him too much respect sometimes when you’re trying to cover a guy like that. Where he can make plays and get pucks to me and Arvi, we have an extra second to do something with it.

“You’ve got to expect the unexpected, you never know what he’s going to do out there, especially when he’s feeling the puck. He’s pretty impressive.”

It’s not just his play that’s on another level, it’s his thinking too. His skill set allows him to contemplate scoring goals that hardly anyone else in their right minds would even attempt.

“I usually think about doing it every time I go behind the net, but it all depends on how much time there is,” Forsberg said of his lacrosse-style move. “I was fortunate the puck was kind of on edge and I kind of just took it and almost had it.”

Forsberg makes those kinds of plays so often that you can become numb to it. Earlier this week against the Minnesota Wild, he played a game of hacky sack with the puck as he came over the blue line before setting up his linemates with a pass.

From the other day, here's Filip Forsberg – at full speed – juggling a puck around a #mnwild defender. Just insane talent. #Preds | @govertime pic.twitter.com/s5jM7o6JPS

It seems pretty hard for Forsberg to “wow” his teammates. That wasn’t the case tonight.

“I know what him and Joey can do with the puck and they’re great players, so I try to give it to them as best I can and try to feed them pucks and work pucks to them,” winger Viktor Arvidsson said. “That play was amazing. I kinda dropped my jaw a little bit when he did it. It was a really good play.”

It wasn’t all voodoo and wizardry for Forsberg on Thursday night. He also made some simpler plays that put the Predators over the hump. Midway through the first period, a brilliant Johansen forced turnover led to an easy 2-on-0 for Forsberg and Arvidsson. A quick game of tic-tac-toe got the puck to Arvidsson’s stick one last time to put it away and give the Predators the lead again.

The Predators’ top line combined for six of the team’s 14 points on the night through a very back-and-forth affair.

“I think anytime you’ve got somebody who’s dynamic, it loosens other things up,” head coach Peter Laviolette said.”To me, that line was excellent tonight. Fil was excellent, he was moving, the goals that they had were beautiful. Fil’s chance was a pretty nifty play. When somebody’s dynamic like that, there’s a good chance you can beat somebody out of a corner or up the ice or in a move. Other players have to help support that player trying to defend it, and ultimately other things can open up. Their line is good, Fil had a terrific game tonight.”

The Predators rode a 42-save performance by goaltender Juuse Saros en route to the win tonight, which gives them their highest point total in a season in franchise history. They now need just four points to lock up the Central Division and first place in the Western Conference.

There are going to be some tight games going forward and into the playoffs. There won’t be a lot of space to give on the ice. But, that won’t be a problem for Filip Forsberg.

“I try to do that just because you have to,” Forsberg said on working with limited space. “There’s so many good defenders. Ice is limited out there, all the teams can play really good defense now. You’ve got to be able to make great plays in short areas.”

The Predators finish their three-game homestand on Saturday with a matchup against the Buffalo Sabres. 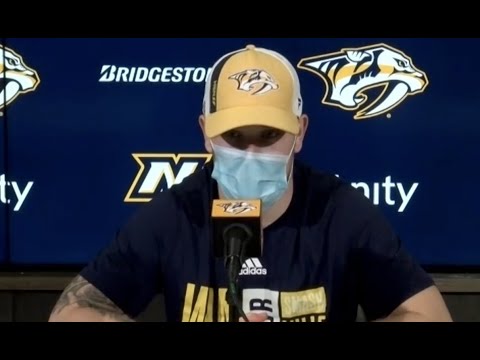