For many people, Saturday meant football rivalries, but for the University of Alabama in Huntsville Chargers, they were focused on bouncing back from a Friday night loss to the Ferris State Bulldogs. Following two goals from Brandon Salerno, the Chargers won 5-3 to get a series split.

The Chargers were fairly lucky to not be down by more than one goal after the first period. Ferris State came out and controlled play from the get-go, taking a 1-0 lead at 1:13 with a goal from Corey Mackin, who redirected in a shot from Nate Kallen. Things started to get chippy between the two teams as the period went on. UAH killed a Brandon Parker slashing penalty, then the teams played four-on-four hockey when Brennan Saulnier and Tyler Dorantes each took roughing penalties at 10:39. Shortly after the teams were back to even, Ferris States’ Craig Pefley say in the box for interference. The Chargers weren’t able to convert on that power play attempt.

Then, late in the first period, Tyler Dorantes was back in the penalty box following a dangerous play where he cross checked Brennan Saulnier from behind. This was after a strong possession by the Chargers in the offensive zone. Dorantes took a five-minute major for cross checking and UAH had a power play that stretched from the first period into the second.

For the majority of the second period, the Chargers had momentum thanks to beginning the period with time remaining on the power play from the major penalty. While on the power play, Josh Kestner notched his eighth of the season at 1:21 of the second with assists from Brandon Parker and Tyler Poulsen. Parker found Kestner for a goal on Friday night as well.

With UAH still on the power play, Kestner then took a tripping penalty at 2:56. During the delayed penalty, Ferris State’s Jasen Fernsler went hard into the board, but no call was made. As soon as the Dorantes penalty that carried over from the first period expired, UAH tallied a shorthanded goal at 3:34 from Brandon Salerno. Salerno streaked into the slot, made a move and beat goaltender Darren Smith on the back hand. Brennan Saulnier earned an assist on the goal.

At this point, UAH had a 2-1 lead, but that wouldn’t last. While on the power play, the Bulldogs tied the game at 2-2 with a goal from Zach Yoder. Charger goaltender Jordan Uhelski was screened on the goal, which was reviewed, but confirmed.

Then, with less than a minute remaining in the second, Ferris State regained the lead. Mitch Maloney, who recorded a natural hat trick on Friday night, put his 12th goal of the season while on the breakaway.

Penalty problems continued when just seconds after the Bulldogs took the lead back, the Chargers went back to the penalty kill at 19:31 thanks to a Richard Buri interference call.

The first half of the third period included a few minutes of whistle-less play, but then at 6:46, Jason Tackett put Ferris State back on the penalty kill for high sticking. UAH had a few opportunities to score, but still couldn’t tie the game. Then at 9:34 following a post-whistle scrum, Connor Wood of the Chargers took a double minor for roughing while Tyler Dorantes of Ferris State had a minor for roughing. The Bulldog power play only lasted two seconds as immediately after the puck was dropped, Corey Mackin sat in the box for interference at 9:36.

While on the power play, the Chargers tied the game at 10:06 playing four-on-four. John Teets notched his second goal of the season, assisted by Hans Gorowsky and Madison Dunn. Not long after the tying goal, UAH took back the lead at 12:54. Tyler Poulsen was on a two-on-one rush with Brandon Salerno. As they entered the home area, Poulsen found Salerno, who whipped it past Smith for his second goal of the night, while Poulsen earned his second assist of the night.

UAH continued to roll in the second half of the third period. While on another odd-man rush led by Josh Kestner, Hans Gorowsky potted his second of the season at 18:05 to all but seal the Charger victory.

There were many times during the game that it didn’t look like the Chargers would have the push to get it done, but they scored goals when they needed to in the third period and completely took Ferris State out of the game. UAH will now be on the road for their next six series before they return home to take on Bemidji State January 26 & 27. 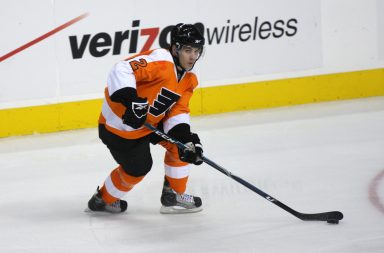