Tonight, the Pittsburgh Penguins will make their first trip back to Smashville since Game Six of the Stanley Cup Final. Bridgestone Arena will be absolutely rocking as the Nashville

Predators try to exact a little revenge after losing to a veteran lead team. Needless to say, the place will be “playoff loud” with the hockey world having their eyes back on the Music City.

All indications lead to the debut of Kyle Turris tonight at Bridgestone Arena. Turris is projected to be centering the second line tonight with Kevin Fiala and Craig Smith. The New Westminster, BC, Canada native brings a veteran leadership that has been missing early this season

after the retirement of Mike Fisher. In eleven contests this season, Turris has three goals and six assists with a -3 rating. Turris has not played a game yet for Nashville, last playing against the Vegas Golden Knights last Saturday. He could be the key for Nashville to turn the corner and finally get vindication against a very talented Pittsburgh squad.

Losers of three out of the last four, the Pittsburgh Penguins have been slipping from their early success this season. They have given up 11 goals over this four game span, yet it is the offense that has seen a decline. Their usual juggernaut of offensive dominance has only scored seven goals, three of which came against the Arizona Coyotes on Tuesday night. Every observer of the Nashville Predators and the NHL knows the ability of the Pittsburgh Penguins’ offense. The Penguins are currently ranked 19th in the NHL with 46 goals scored on the season, and will look to get back on track in Nashville tonight.

The Nashville Predators will welcome back the Pittsburgh Penguins to Smashville tonight. The hope is to have a different outcome than what happened in June. Be sure to catch all of the action on Fox Sports-Tennessee or you can listen live on 102.5 The Game. Puck drops at 7:00 pm! 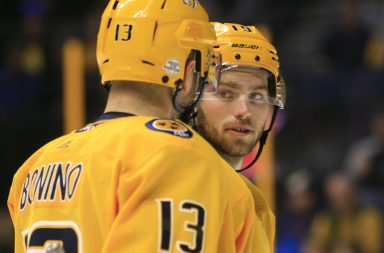