Outside of the 1980 “Miracle On Ice” gold medal Olympic team and the 1996 World Cup champions, success has been missing from USA Hockey despite boasting some of the best talent in the world.  With the likes of Patrick Kane, Jonathan Quick, and Max Pacioretty, America has constructed a would-be NHL All-Star roster.  The emergence of Jack Eichel and Auston Matthews, who on Wednesday became the first player in NHL history to score 4 goals in his first game, has given USA Hockey hope for the future.

But why has the organization failed to produce greater results in the last decade?

I believe anytime you construct a team that consists of the most successful and talented individuals, it creates a culture with zero identity.  You’ve got guys like Kane and Quick who have won 5 Stanley Cups in the last 7 seasons playing along side guys like Dustin Byfuglien and Jack Johnson, neither whom have experienced overwhelming success in the NHL on their respective teams.  Going into a tournament like the World Cup, Team USA already has a significant culture gap among their players.  When you view Team Canada’s World Cup-winning roster, perhaps unfairly, you’ll count 10 Stanley Cup champions.

Then you’ve got Phil Kessel who didn’t hold back after Team USA was swept out of the World Cup of Hockey.

When you’ve got some of your greatest players that resentful at not being picked for the team, what other ego problems go unreported from the locker room?

I think Chris Peters said it best after Team USA lost the final game of the tournament:

The American talent pool has evolved since then, but Lombardi was so obsessed with the 1996 team that he tried to build a team to win the 1996 World Cup in 2016. The end result was even worse than many of the pessimists predicted.

“I just have such admiration for the history of this program and U.S. Hockey that I think it transcends hockey, and I just think it’s very important that we learn from that history and continue that on,” Dean Lombardi, President and GM of the Los Angeles Kings, said after being named the general manager for the USA World Cup squad.  He would continue on with listing the achievements of the 1996 World Cup team ranging from 6 Hall of Famers and 23 Stanley Cups.

This is not THAT team.  Not anymore.  Maybe they will be when Eichel and Matthews and Brandon Saad all come into their own.  But until those kids are ready to accept the torch being handed off from the likes of Mike Modano, Brett Hull, and Mike Eruzione (partially because Kane, Quick, and Ryan Kessler dropped the torch), then the powers in Colorado Springs are going to have to have a coming-to-Jesus meeting and quickly if they want to keep the momentum that has propelled the injection of youth into the college, juniors and professional ranks. 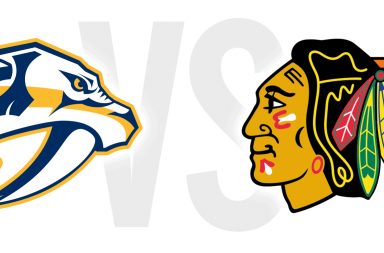 Predators vs Blackhawks Preview! Preds look to be Road Warriors.