As The Puck Spins - The Journey Of A Growing Hockey Fan

Exiting your comfort zone to pursue something far different than anything you’ve ever done before can be difficult and equally as scary. Likely so is also an adrenaline rush that couldn’t have been experienced unless you nosedive into something full steam ahead and submerge yourself into it without question. This is what I am about to do. Welcome to my life as a newbie hockey fan of the National Hockey League (NHL) and Nashville Predators.

I’ll admit that my first hockey game came on a very cold and snowy night in December 1999. I watched the Pittsburgh Penguins wallop the Toronto Maple Leafs four rows above the ice 5-2. The game was ‘cool’ but never really had any special meaning to me at the time. Over the years and after that initial experience, I watched a minor league hockey game in Portland, Oregon, a couple of Columbus Blue Jackets games in 2006 and 2007 and prior to a couple of Predators games another Pens game at the newly-built Consol Energy Center in 2014. Much like before, it was something fun to go to but never had much meaning in my life.

Fast forward to about a year and a half ago. A leap of faith after a layoff brought me to the Music City to pursue stable employment and ‘start over.’ Getting settled with a new job, place to live, and other joys of moving to a ‘bigger’ city was quite overwhelming at first. Prior to officially moving here, I made it a priority to watch a couple of Predators games just to see how they were. Ironically, both games I attended were both heartbreaking losses by only a goal or two. While the net result was short of victories, they were fun as all get out! As I drove back home to the place I was moving away from, my thirst for the Gold and Blue became more and more.

Commitment to the Gold & Blue

Painted outside the Nissan SoBro Entrance of Bridgestone Arena, a sign that Preds fans live by.

Fast forward the clock to July 2015. Thirstier than ever from the experiences just a few months ago, I picked up the phone and expressed interest in getting some type of season pass for the upcoming season. After some see-sawing and phone-tag, a tour was had. The representative and I talked about my recent move and he showed me several seats to choose from. Though vague in my mind, one of the first options available was a seat in Section 302, Row B. It felt like ‘Home Sweet Home’ and soon after that on warm August day in 2015, I became a member of the Loyal Legion and citizen of Smashville.

So to not go into so much detail readers are falling asleep at the wheel or have a case of keyboard face, the time between then and now has been quite exciting and awesome. The first game as a member of Smashville was indescribable. As the season went on and I settled into town, I deepened my passion for the team. Proof positive of this included becoming an Ambassador for the team to help spread the love and Preds Pride; working the 2016 NHL All-Star Fan Fair and All-Star Game, and providing friendship and support to many people that work behind the scenes amongst other things. More or less, I came in as a guest, left as a friend, and continue to come back as a member of the Loyal Legion family.

But there is one void that is missing from this story that I hope to fill share with others. As I enter my second full season of being a Smashville resident, I still haven’t much a clue as to what the game of hockey really is. To be humorous about it, if I were to go onto Jeopardy! and have to answer questions about hockey, I would probably be wrong on almost all of those questions and be too far in the hole to dig myself out of it.

But not for long my fine friends because this void will be permanently filled courtesy of stops in play, fabulous tunes from Krazy Kyle, a delicious announcement or two from Paul McCann, and many blasts of the goal horn. Yes! I want to know more about the sport of hockey and as I learn the game, I intend to share the experiences with you, your friends, and others that you pass the story along to. Learning is a lifelong experience and sharing the knowledge wealth is an extension of Southern hockey hospitality.

In reality, from now until the eventual happy ending we all want (Lord Stanley taking a stroll down Broadway), is two-fold in this slick tale. First and foremost – hockey fundamentals and how someone like me that knows little about hockey whipsaws his way up and down the rink to learn the sport. Second and naturally to tie into the latter are experiences I share as a fan. This season, just around the bend, has already been magical in the offseason. The best is yet to come and I can’t wait! What about you? Thus, the journey will go near and far; high and low and I hope that the knowledge I learn can be shared with many others the world over.

Final Thoughts Before The Next Period

Since being in Nashville, I’ve taken two leaps of faith. One was to move here and another to become a part of the Loyal Legion and resident of Smashville. The next leap of faith is the biggest one yet going into the really deep end of the hockey pool. When I take this plunge, it is without a life vest, water wings, or safety net in the quest to become the resident Doctor Dougerz of Hockeytology. Come on down!!! And come aboard as I’d love to have you come along for #theride. 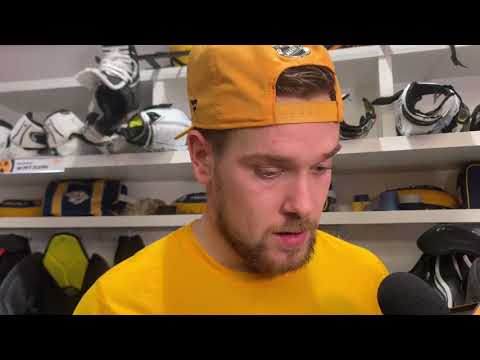