With the NHL Awards over and the announcement of expansion to Las Vegas now in the past for the week, all eyes of the hockey world now point to Buffalo for the 2016 NHL Entry Draft. At Penalty Box Radio, we’ve fostered an excellent relationship with International Scouting Services (ISS hockey) over the years to help give a better look at prospects and the draft.

Recently, we spoke with Director of Scouting Dennis MacInnis and Head U.S. Scout (and former NHL goaltender) Phil Myre on a multitude of topics concerning this year’s draft. Myre gives a great scouting report on three top goalie prospects and MacInnis addresses the debate between Auston Matthews and Patrik Laine.

If you want more information, purchase the ISS Hockey Draft Guide here for a detailed look at hundreds of prospects set to be chosen this weekend.

Justin Bradford: In looking at this year’s draft compared to other years, how do you see this draft in regards to top-tier talent, mid-level talent, etc.? How strong is this draft class?

Dennis MacInnis: This year’s draft, to us, is a bit top heavy. I don’t think we have the depth that we’ve had some of the other years. Everybody has kind of penciled in the top three guys as they separated themselves from the rest of the group. Once you get past the 22nd or 23rd pick, things are wide open. For us, the guys between 25 and 40 are pretty interchangeable.

JBB: How did post season play for the Canadian Hockey League, and even the World Championship, change your rankings? Did anyone stand out to you?

DM: It didn’t really change our rankings a lot. It did have an effect on [Matthew] Tkachuk in London with his playoff performance and Memorial Cup performance. He moved up a couple of spots in our rankings. Guys like that help themselves. Basically, our rankings were pretty much set after the playoffs in the CHL.

PM: The thing is that those players are expected to do well. I think it would have a greater effect if they didn’t do well. You expect those guys to be dominant. The one guy I thought played really well for London that could effect his ranking is [Victor] Mete, the little defenseman. Because of his size, he’s not as high as the others, but I thought he played very well.

JBB: Patrik Laine or Auston Matthews, both are going to be really good players, but what is the difference between them in why Toronto may choose to go with one over the other?

DM: For us, Matthews has always been a top-ranked player in this draft over anyone. We actually had a bigger debate among ISS staff over the second and third pick. Jesse Puljujarvi was second for almost all of the year until the World Championship where Laine broke records. He might have the biggest upside in this draft if his skating comes around.

PM: Matthews, as a centerman, is a very valuable asset. He plays a 200-foot game. He does everything very well. He’s got size, can be physical, can fight through checks, scores, makes plays, he’s the complete package. I think Laine is a big kid with a great shot and a knack for scoring. He’s not one dimensional, but he has that one skill-set that separates him from others, the big power forward identity. Matthews just offers a little bit more.

JBB: What is it about the Windsor Spitfires that helps them continually churn out players that are ranked to go in the first round?

DM: I think that winning tradition makes it a little easier for them to attract some of the high end kids from the States and Europe. Both London and Windsor are always active in the import draft.

JBB: What is the goalie situation looking like in this draft? Are there any standouts that you really think could be a starter in the next few years?

PM: There are some big goalies, but we don’t feel at this point in their development many high end goalies. We think there will be some good goalies. We really like Evan Fitzpatrick, who plays in the Quebec league. He played on a bad team, got a lot of shots. Very systematic. What I like about him is there’s no surprise. Plays the same way every game. Falls into his system and technique, and that’s what you get. He uses his size very well. Some of the things he will have to improve on are his puck handling, his overall rebound control and foot speed. He’s one of those kids that has potential.

The other kid we really like is Filip Gustavsson. We have him in the second spot and who knows, some people may like him better than Fitzpatrick. Both have the same type of play. Gustavsson is very calm and much in control. He’s shown some stability and the ability to play the same way every night and give his team a chance to win.

The third one that we think has the high end potential is Joseph Woll, who played for the USNTDP this year. I’ve watched him play since he was a midget. He’s constantly gotten better. Great size, handles the puck well, rebounds are okay, very technical to the point where he almost needs to play more with instincts. He needs to approach the game and be a little bit more consistent, but he does have that upside.

JBB: ISS has Nashville picking a winger in the first round, but some think the Predators should pick a defenseman. What is your reasoning behind that and how do you see the organization’s need as defenseman.

PM: If they’re looking for defenseman, at 17 they’re not going to see any of the top three guys, but what they would be looking at are players like Jake Bean and Dante Fabbro. Bean is a smaller, offensive players. Fabbro is a little bit bigger, but more of a two-way defensman. If they like big guys, they may like Logan Stanley out of Windsor.

JBB: How is it that ISS has been able to build the network to become a leading source for prospects?

DM: Great ownership is where we start. We currently have 10 European scouts and 45 of us here in North America. We also have an internship/mentorship program that has gone very well. We train on the Rinknet program, which is the same program that NHL and CHL teams use. It’s a big advantage as scouts to have access to the same software that everyone in the industry is using.

Stay tuned to Penalty Box Radio for full coverage live from Buffalo brought to you by Katye Smith with The Ashton Real Estate Group. 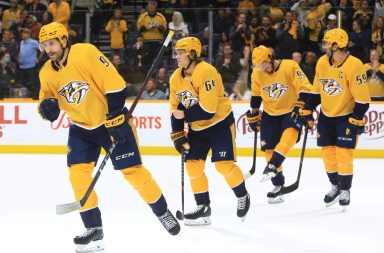 The Predator Way: Episode 3 – The Return!