Logan Stanley of the Windsor Spitfires is ranked 19th on the NHL Central Scouting list for North American skaters. ISS Hockey has him ranked 25th in their top 30 for all prospects. Standing at a towering 6’7″ and 220lbs, the 18-year old defenseman out of Waterloo, Ontario is set to be a solid addition to any organization’s blue line prospect pool.

Stanley could easily be picked as high as 15 or 16 or as low as the late 20s, all depending on team needs and how he could fit in the organization. He’s had tremendous growth spurts over the past few seasons, but has a frame that will allow him to add some much-needed muscle. There is a lot of potential in Logan Stanley that would make him worth a pick for the Nashville Predators, and let’s not forget that they already found a very solid defenseman from the Windsor Spitfires in Ryan Ellis.

Game scouted: March 10, 2016 vs Sarnia. Head Coach Rocky Thompson noted it might have been one of Stanley’s worst games of the season, but he still showed a lot of potential and promise even in a poor game.

What kind of defenseman are you?

“I think I try and play a two-way game but try and take care of defense first. I move pucks, and then when the time is right, jump in to the play.”

How do you use your size to improve your game?

“With my body, I have to be physical and use my stick to my advantage, have a long reach and block shots and play simple. Just do the things that big defenseman do in the NHL.”

You play on both the power play and penalty kill. How do you adjust your your game for each situation?

“I think I try and take the mindset and just keep it simple on the power play. Give it to the skilled forwards, and when I get a chance, just shoot the puck hard. On the penalty kill, I just play my role by blocking shots and clearing pucks.”

Straight from the coach’s mouth

What kind of player is Logan Stanley and what makes him a quality pick for the draft?

“He’s definitely been able to break pucks out extremely well, which is very important. He skates well. He’s done some good things offensively on the blue line. That’s an area of his game that he continues to improve. He does have a lot of bite to his game. He’s hard to play against. He’s a physical player. On most nights, he’s really started to learn his position, which makes him tough to beat. The strength factor is going to come with his size. There’s a lot of untapped potential.”

There are a multitude of talented defensemen ranked right in the middle of potential first-round picks. It really is a toss-up for as to what team each player will go for Friday evening. Each team has their own set of scouts and internal rankings, but with Stanley’s size and potential upside, he could easily move into the middle teens. 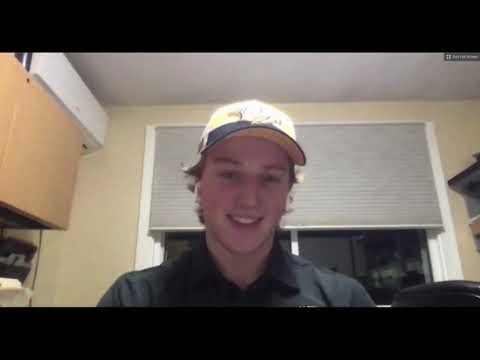 Winner of the new best name in the org, Gunnarwolfe Fontaine