With the NHL Entry Draft looming at the end of June, the tough decisions for teams draws closer. Most players in juniors and all in college have completed their seasons. Aside from a few shifts in the rankings that could be seen following the completion of the Canadian Hockey League playoffs and Memorial Cup, the latest rankings from ISS Hockey are near set. Below are the latest rankings for the top 30 prospects in the 2016 NHL Entry Draft.

You can also read our other prospect reports here on PBR on Jakob Chychrun, Michael McLeod, Alex Nylander and Tyler Benson from writer Steven Ellis.

With its May release of the ISS Top 30, ISS Hockey reveals a preview of the final NHL Draft rankings to be published early June in the industry-leading ISS NHL Draft Guide

May 04, 2016 [Waterloo, ON] ISS Hockey has released its monthly ranking of the top prospects eligible for the 2016 NHL Entry Draft. This month’s rankings include the top 200 skaters, along with the top 20 goaltenders, as evaluated and ranked by ISS Hockey’s worldwide network of scouts.

The industry-leading ISS NHL Draft Guide will be published June 1 and more for the 2016 NHL Entry Draft, to be held on June 24-25, 2016 at the First Niagara Center in Buffalo, New York. This is the only annual opportunity for fans to “Get What the Pros Use” in advance of the NHL Draft. To order or get more info, go to: ISShockey.com/nhldraftguide

This month’s release outlines an unchanged pattern in the top three rankings of the ISS Top 30. With one more final release to go, Auston Matthews, Jesse Puljujarvi and Patrik Laine are locked into their respective top three rankings for May. Dante Fabbro is the biggest mover, jumping drastically into #19 based upon an outstanding showing at the 2016 World Under-18 Championship.

“He stood out and was well liked by our scouts at the World U18’s,” says ISS Hockey Director of Scouting Dennis MacInnis. “Fabbro showed patience and composure with the puck in all situations. He has the ability to create offence from anywhere on the ice.” 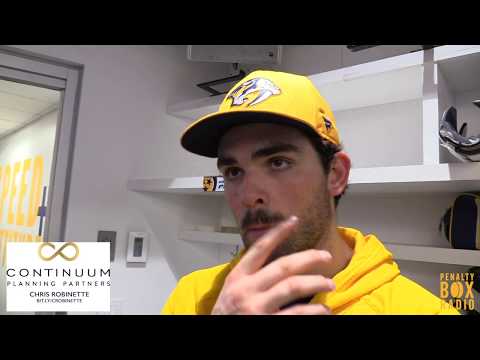 Preds down Blues to complete home and home sweep