If you follow the Ontario Hockey League, there’s a good chance you know about the “Exceptional Status” rule. If you’re good enough to play in the OHL before your draft year, you can apply and, maybe, get a chance to play against older competition earlier. But did you know that it’s not uncommon for minor bantam and bantam players to play minor midget?

Well, yes, it’s true, and Ryan Merkley is a prime example of that. Not only did he excel as a 14-year-old a year ago, Merkley saw action in a game for the Toronto Jr. Canadiens Minor Midget team as a 13-year-old two years ago. It wasn’t much, just a single game for the legendary club, but it proved that the youngster was already well ahead of his class. Merkley would spend the whole season with the top-ranked 1999-born Jr. Canadiens, who finished the season on top with a 60-17-5 record through regular season games and tournaments.

For an underaged defenseman, getting a chance to play in the GTHL Top Prospect game while playing against older competition was simply astounding. In tournament action, Merkley finished with six points in seven games at the season-opening Toronto Titans tournament. At the end of the season, Merkley put up an impressive five points in as many games at the elite OHL Cup event, helping the Jr. Canadiens to a semi-final appearance while playing some key minutes.

This year, Merkley has done everything but disappoint. A leading player every time the Jr. Canadiens take to the ice, Merkley started off the year with 16 points at the Toronto Titans tournament, good to beat out teammate Alexander Dipaolo by three points for the top scoring honours in the tournament despite being a defenseman. By January, most teams had Merkley as a top three pick in this year’s OHL Draft, a testament to how well the offensive defenseman has proven himself this year.

One of the best two-way defenseman to go through the GTHL in recent years, Merkley doesn’t rush a play if he doesn’t have to but does everything right when he does. Merkley has incredible awareness, allowing him to create holes with very little room to work with and can go end-to-end multiple times in a single period. In some of his better games, Merkley has been able to score a goal or two on the breakaway, despite sometimes sitting back farther than the rest of his team on the start of a play. Nico Gonzalez, an OJHL veteran who has played with Merkley a few times with the Toronto Jr. Canadiens, said on The Hockey House TV show on RogersTV in Mississauga, Ontario that Merkley is one of the best players he’s ever played with. Projected as the second overall pick in the upcoming OHL Draft by HockeyProspect.com, Merkley is one of the top defenders in a draft that’s deep on the back end.

However, like some players with a tremendous amount of skill, Merkley can be frustrating at times. A quick skater, the Mississauga native does tend to slack off on a few shifts during a game. That’s not uncommon for a young defenseman with as much potential as he has, with Sean Day falling victim to a similar situation before eventually earning “Exceptional Status” by the OHL. Sometimes, he needs to focus a bit more on defensive responsibility in his own zone, almost like a younger PK Subban, but he makes up for it with solid backchecks and tremendous speed.

Merkley’s next big challenge will be playing for Team Canada at the Youth Olympics in Norway later this year, taking place from February 12th-21st. Merkley has already played in two OJHL games with the Toronto Jr. A Canadiens by the middle of January, not looking out of place while playing against players as much as five years older than him. Merkley’s Jr. Canadiens AAA squad is a top ten favourite once again in Ontario, with a shot at the GTHL title proving to be more and more likely every week. The club should be in the OHL Cup when the tournament takes place at the Scotiabank Pond outside of Toronto in the middle of March, with Merkley easily being one of the highlights to watch in a tournament full of future NHL superstars.

Mark my words: Ryan Merkley will be a future Norris Trophy winner someday. Get to know 2019 5th round pick, goaltender Ethan Haider 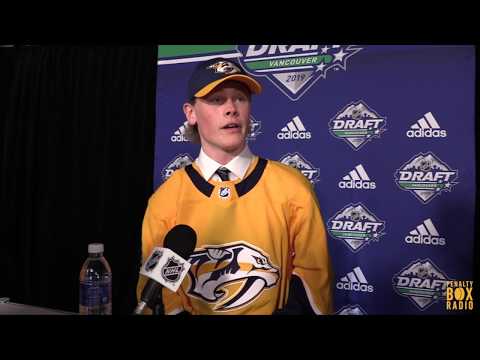 Preds use 7th round pick on Juuso Pärssinen 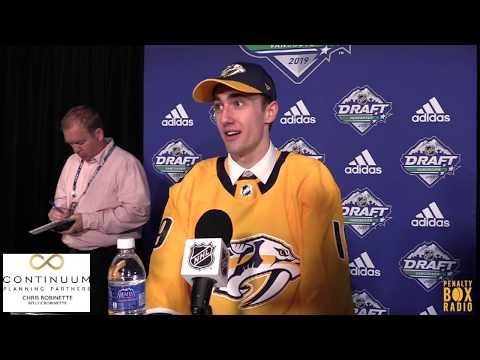 Preds use third round pick on center Alexander Campbell