Before traveling to the Music City to take on the Predators, Penguins head coach Mike Johnston decided to remove Phil Kessel from Sidney Crosby’s line and place him with Evgeni Malkin. Those two were set to skate with rotating wingers—namely Daniel Sprong, Sergei Plotnikov and Chris Kunitz—and, if the experiment worked out, consider it a long-term solution.

Based on Saturday’s performance, that may well happen.

Despite facing a staunch Nashville defense, Malkin and Kessel developed quick chemistry and generated a lot of offense together. Malkin distributed the puck with ease, and Kessel took advantage by firing six shots on net—the last of which resulted in the game-winning goal.

“(Malkin) made a good play on the blue line, and I got the puck from him,” said Kessel. “I just kind of went around and got a two-on-one there. Fortunately, I got a rebound and there was an empty net.

“When you watch (Malkin), he’s a great player. He made great passes to me all night. I didn’t bury some I should have buried from him; hopefully I get them next time…He makes great plays, great passes. I think he’s pretty easy to play with.”

Johnston noticed the two were in sync, as well, and based on his post-game presser, doesn’t plan on splitting them up any time soon. Nor should he.

Malkin and Kessel’s success could have a lasting effect on other forwards, too: Pairing them up allowed Johnston to reunite former Pred Patric Hornqvist with Sidney Crosby, which should help ignite Pittsburgh’s offense moving forward. That duo enjoyed a lot of success in 2014-15, when they outscored opponents 31-7 at five-on-five.

“You know, we’re going to do whatever we can to win games,” Kessel added. “That’s the most important thing—keep winning games. I think whoever you play with you do whatever you can to help win.”

Andrew Hirsh is a former writer for SBNation covering the NHL and has been covering hockey for many years on various sites. Currently, he works with the Atlanta Falcons of the NFL providing daily online content. 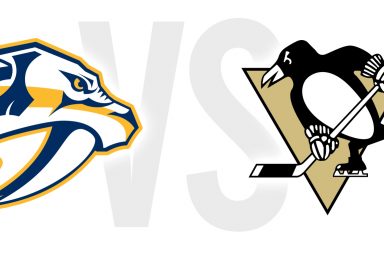 Predators vs Penguins Preview(s)! Preds look to Take It All in Back to Back