Team USA notched their fourth straight shutout win against Team Germany in a 6-0 win on Sunday.

The nerves that Team USA played through in their opening game on the 26th seemed to be gone in their second game against the Germans. The Americans set the tone of the game in the opening minutes as they generated multiple scoring opportunities.

The first goal of the game came just under five minutes into the game with Austin Matthews scoring a wrap-around goal with Nick Schmaltz getting an assist.

Team USA was not done putting points on the board in the first as Hudson Fasching got his first goal of the tournament. Fasching connected for a rebound goal after previously whiffing on a pass from Dylan Larkin. Fasching got just enough on the initial shot for it to bounce back to him, this time getting full contact to put the American’s up 2-0.

Team USA went up 3-0 during a 4 on 4 period early in the second. After failing to score just moments before Sonny Milano managed to get a turnover in the neutral zone that resulted in a 2 on 1 breakaway with J.T. Compher. Milano skated down the right side and attempted a pass to Compher. That pass bounced back to him off of a Team Germany players skate. The quick bounce back to Milano caught Team Germany goalie Ilja Sharipov off guard leaving plenty of space for Milano to bury the puck for his first goal of the tournament. Larken made it 4-0 USA with a backhand goal with 4:56 remaining in the fourth period. Noah Hanifin got the assist.

The final period of the game was rather quiet until Team USA Captain Jack Eichel notched his first goal of the tournament with a wrap around goal. Eichel was well behind the net when his goal went into the net. Tyler Motte and Alex Tuch each got an assist on the fifth goal of the game. Dylan Larkin closed out the scoring for the American’s putting them up 6-0 with 20 seconds remaining in the game.

Ilja Sharipov earned the player of the game honors for Team Germany while Dylan Larkin earned it for Team USA.

Germany will get a day off after playing back-to-back game before they take on Slovakia on Tuesday. Team USA will get a shot at Slovakia tomorrow at 5pm Eastern. 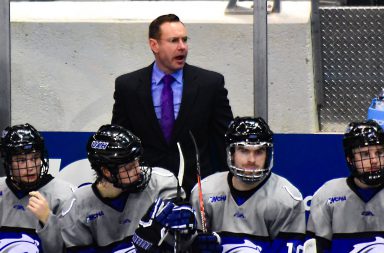