As the season begins to wind down for Alabama-Huntsville, the weekend saw Lake Superior State come into town. Following a 2-1 loss on Friday, the Chargers looked to avenge the close loss to the Lakers. In what was a very close, physical game, UAH was able to keep the game tied until a late goal was tipped in by Lake Superior State, leading to a 3-2 loss.

Even though the two teams played the previous night, the first period started out fairly slow. Besides a goal that was waved off due to a net being off the moorings, play did not pick up until 6:01 of the first when Ian Miller scored off a spin-o-rama for the Lakers.

The Chargers finally tallied their first shot on net at 7:48. UAH’s offense had been stymied throughout the early part of the first due to a strong forecheck by Lake Superior State. The Chargers found themselves on the power play with a few scoring opportunities but goaltender Kevin Kapalka was up to task, stopping each attempt.

As the first period carried on, UAH seemed to discover their offense, as they racked up shots and scoring opportunities. In the defensive zone, they were able to break up plays and force Lake Superior State shots to the outside. Being active in the defensive zone helped UAH get on the board as Jeff Venderlugt took a pass from Doug Reid entering the offensive zone and wristed it over the shoulder of Kapalka at 19:31. Scoring late in the first would help boost the confidence of the Chargers.

UAH came out roaring to begin the second period. A penalty by the Lakers was quickly followed by a penalty by the Chargers. Not long into four-on-four play, Matt Salhany put in his fifth of the season on a breakaway. Salhany charged in and put in a beautiful forehand-backhand deke and roofed one on Kapalka.

The goal gave the Chargers continued momentum with lots of energy as they put pressure on Lake Superior State. Physicality by UAH could definitely be seen throughout the second has they laid many big hits on the Lakers, which seemed to frustrate the opposition.

Carmine Guerriero continued to be big in net for the Chargers. This included killing off a Strukoff penalty and a tremendous glove save on a Colin Campbell breakaway.

Although Guerriero played strong, he could not stop Stephen Perfetto, who streaked in and ringed one in off the cross bar for his seventh of the season at 18:06. With the game now tied at two each, a great opportunity would come up for UAH as Lake Superior State took a penalty late in the second, which would give the Chargers a power play to begin the third.

Both teams began the third playing very evenly. Exchanging scoring opportunities, with UAH continuing to press hard on the physicality front. All the momentum drained from the Chargers when the Lakers took at 3-2 lead off a tip by Dan Radke in front of the net from a point shot by Zach Loesch.

With 1:16 remaining and down by one, UAH took their timeout to try to find a way to tie the game. With a minute remaining, the Chargers pulled Guerriero to give them an extra attacker. Unable to tie the game, UAH fell to Lake Superior 3-2. It was a great effort by the Chargers, but again they fell one short.

Below are comments from head coach Mike Corbett:

*All pictures courtesy of UAH Hockey* 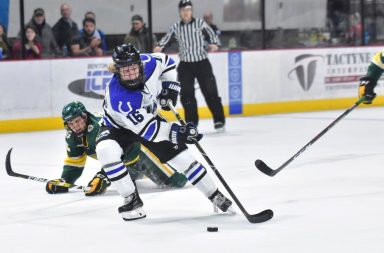 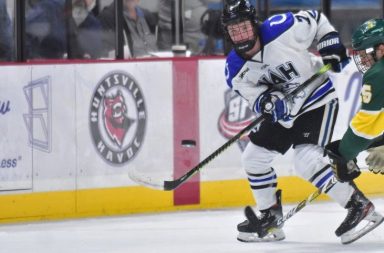