Bullying is a widespread and serious problem among the youth in today’s society and Colin Wilson of the Nashville Predators can relate to those who have been or currently are being targeted. He has teamed up with STARS (Students Taking A Right Stand) of Nashville to help raise awareness and to spread his message to students throughout the Nashville community.

“It’s a great campaign,” said Wilson. “The people there are awesome. They’ve helped me get my message across whether it’s writing articles, doing a commercial, or me going out and talking to students. They’re the ones organizing it and it’s been a great relationship.”

STARS, also named a Top Workplace of 2013 by the Tennessean, is a youth-focused non-profit agency that works with schools and communities to provide prevention, intervention, and treatment services, addressing bullying, substance abuse, violence, and other social and emotional barriers to success.  They remain committed and responsive to students and families throughout Middle Tennessee. Other noteworthy people that support this program include country music star Vince Gill, who was named 2013 Nashville Philanthropist of the year.

“I went out for one event and Wade Belak was the one representing our team and I really liked it. I really liked the message, so it was a no-brainer when they asked me to keep coming out,” spoke Wilson on getting involved with the organization.

Wilson knows how bullying has changed over time, especially with social media and the internet. Being able to make a difference and connect with children is important to him.

“It’s a rewarding feeling,” said Wilson. “I’m hoping my message can get across. It’s something that’s a lot more prevalent right now with bullying. With the internet you can’t really get away from it so it’s something that we need to take care of.”

Wilson has previously participated in the Kids On The Block program and has spoken with several elementary school classes and expressed several neat experiences along the way.

“I got to talk to a whole assembly of kids,” Wilson told us. “They called in the whole school. Another would be when I went home for the lockout; my uncle and aunt had me speak to my cousin’s class. That was pretty exciting being able to talk to those kids and help out Winnipeg, where I grew up, which was pretty exciting for myself.”

The experience of being around children and knowing that they see him as a role model is something that greatly encourages him in his involvement.

“It’s great being around the kids,” said Wilson with excitement. “They all seem to really like it. You can kind of see their eyes light up when they see me there and I hope that it stays with them.”

He encourages and gives advice to kids currently being bullied: “It’s cliché, but talk to someone. Talking to people, getting help because when you keep it inside you start feeling more stuck. It just makes everything worse. Try to sort it out with a counselor or go to your parents.”

Wilson enjoys getting involved and making a difference in the community by spreading his message and supporting an organization that hits home for him. “It’s been great with the amount of awareness they’ve been creating. I’ve seen it grow over the past few years. Just keep doing more to raise awareness for it.” 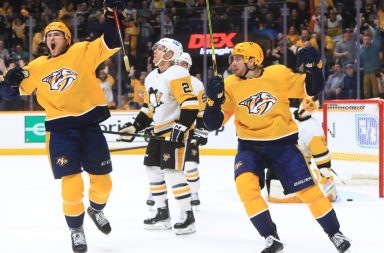