The first period was very exciting as how one might have expected in a typical USA versus Canada match up. High energy, lots of hitting, end to end action. What more could one ask for? Despite USA dominating puck possession for most of the first period and being out-shot 13-6, Canada had its moments.

Team Canada’s goalie Zachary Fucale, also awarded player of the game, opened up the game with a huge save on USA’s Jack Eichel just 4:49 into the period. USA seemed to feed off of this and continued to gain momentum throughout first period. USA continued to pepper shot after shot at Fucale, but Fucale managed to continue making impeccable saves, knotting the score at 0-0.
Unlike the first period, the momentum of the game shifted and Canada dominated the second period. USA started off with a power play drawn by Nic Kerdiles on Taylor Leier for slashing. With just 30 seconds left in the power play, USA goaltender Jon Gillies was called for hi-sticking, resulting in a 1:30 minute power play for Team Canada. Just as the power play began, Team USA Captain Riley Barber made it 1-0 scoring a shorthanded wrap around goal. Jaccob Slavin and Nicolas Kerdiles picked up the assists. That goal, at 3:29, woke Canada up. USA’s lead did not last long as Canada’s Nicolas Petan, Winnipeg Jets prospect, tied the score at 1 with 7:41 remaining in the second period. As well as scoring his teams last 3 goals. With just 12 seconds left, Canada’s Derrick Pouliot takes an interference penalty. The score remained 1-1 after two periods.
Canada continued the momentum from second into third, killing off USA’s early power play. Sixteen year old sensation Connor McDavid, who is eligible for the 2015 NHL draft and is expected to go first round, finds a loose puck and scores giving team Canada an early lead in the third period. Crowd begins to cheer loudly as Fucale chants ring throuout the arena in Malmo. With 13:47 remaining in the third period, Curtis Lazar, Edmonton Oilers prospect, scored Canada’s only power play goal on a beautiful pass from Jonathan Drouin (Tampa Bay).
Despite being down two goals, USA poured on the pressure to make a late push. Stefan Matteau, New Jersey Devils prospect, managed to get one past Zach Fucale with 2:45 remaining in regulation, making it 3-2. Canada held onto their two goal lead for the remainder of the game for the win; clinching first in group A, with Team USA in second. Team USA led Canada in shots 26-24 with goaltender Zach Fucale making 24 saves, resulting in winning the game as well as player of the game.
Canada’s next game will be a quarter final match up next Thursday at 11 am ET against Switzerland.
USA will face Russia at 6am ET Thursday.
About Caitlyn:
Caitlyn was born in Raleigh, NC and grew up a Carolina Hurricanes fan. She fell in love with the city of Nashville at an early age and knew that is where she wanted to end up. She attended her first Nashville Predators game in November of 2010 and was instantly hooked! 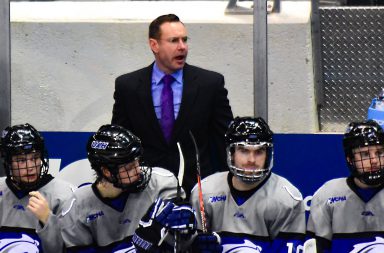