Growing up as a kid in north Ohio, ice skating was something almost every kid did during the winter.  My brother and I even had some old sticks and would play one on one pond hockey once it got cold enough to freeze over.  Unfortunately, those were nothing but a face-off followed by an empty ‘netter’, with no slap shots or else the puck would be lost until spring.  It is safe to say there was not much excitement in those games.

That was my last time on skates since getting back into the activity as an adult. Not that long ago I was at my first public skate at Centennial, expecting to glide up and down the ice faster than I could ever hope to run.  Two steps later, that fantasy came to a quick end.  I was surrounded by kids speeding past me, most of my attempts to let go of the wall being met by a quick fall, and 15 minutes later I couldn’t tolerate the pain in my feet. This was nothing like riding a bike, I had forgotten everything.  But, I also decided that I loved the game too much, and that I was going to do whatever it took to learn it.

If I was going to do this, I decided the first thing I needed was my own pair of skates.  There was no way I was going to learn on a pair of rentals, broken in to someone else’s feet and lucky to have been sharpened in the past year.  I purchased a pair online and in the meantime continued to practice on some rentals from the era of leather helmets.  I was starting to get a feel for my balance, but was nowhere near comfortable out there.  I was also going to need instruction.  I had already signed up for an adult clinic series with the expectation that my skating would have come back to me by the start.  However, I may have been a little too hopeful in that thinking.  On the day the clinic was set to begin, my first pair of unworn skates arrived.  I had known enough to have them sharpened before taking them out on the ice.  What I did not know about was a method of baking them to help them fit comfortably.  I have been told before I have flat feet, so this may not apply to everyone, but the one thing I remember vividly about that first time on new skates was pain.  I can say that it does get better, but that first 25-30 hours of breaking in a new pair, I was miserable.  I will definitely learn more about the baking process for my next pair.

The proper process would have likely been to take skating instruction prior to jumping into a hockey skills class. I have recently heard playing the game is 90% skating ability.  It doesn’t matter how amazing your wrist shot is if you can’t get to the puck.  I tend to be pretty impatient and impulsive though, I wanted to learn and learn fast.  I now have mixed feelings on the path I chose.  On one hand, by throwing myself right in with the wolves, I didn’t have time to worry about my limitations.  When working on techniques such as crossovers or stops, the basics are going to naturally come along.  On the other hand, I never received a proper foundation to build on, so my fundamentals may have some bad habits I would need to work harder on to improve.  When I can find the extra time in my schedule, I also plan on taking a novice or intermediate ‘learn to skate’ class, just to make sure I have all the proper groundwork.

For the next chapter, I hope to discuss some of the techniques I have picked up on.  While I am definitely not qualified to be giving any instruction, I can hopefully give anyone interested an idea of what to expect.

Check out my previous installment on hockey equipment. 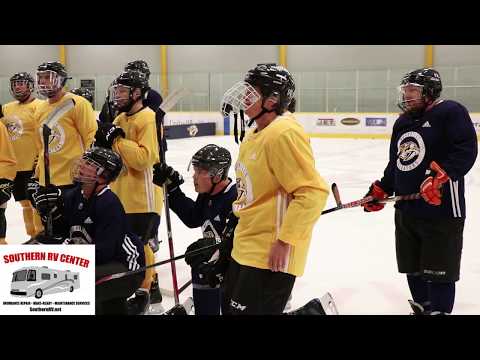